To begin with, let me explain this;
Tencha is the name for tea leaves used for Matcha. In other word, Tencha is ground into powder. Once tencha become powdered tea, it is called Matcha.

Also, when green tea，especially high quality tea including Tencha, is brewed with water, not hot water, it will be richer in "Umami", a kind of amino acid. It is called “mizu-dashi” method. (“mizu” is water, and “dashi” means brew)

OK,now......at a Japanese tea room in Osaka.
They served me this: Cheese and iced Tencha tea brewed in “mizu-dashi” method. 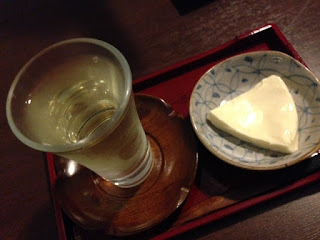 Actually, I knew cheese and black or Oolong tea can go well. But I just thought green tea won’t. I don’t know why, I just had such a fixed idea. But….interestingly, it was good combination. Both cheese and Tencha tea have amino acid and they didn’t clash.

Then, they served this too: Cheese with black pepper and Sencha tea brewed with hot water, not high temperature. 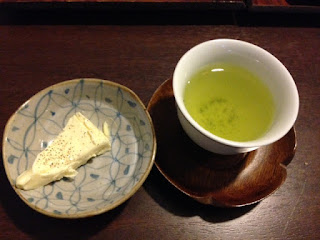 It was more interesting. When I drank the tea after having cheese, the cheese became much milkier. Then, aroma of pepper remained a bit, which was good.

Many of you may know the marriage of cheese and green tea already. I should’ve known that much earlier. My today's lesson was.... “Think outside of the box!” :-)

BTW, the variety of the green tea is very very special. An annual production of the tea is....just 10kgs! Lucky me!

at June 25, 2016
Email ThisBlogThis!Share to TwitterShare to FacebookShare to Pinterest

While I was in London this May, I joined a seminar conducted by a well-known tea maker. Some, from Australia or South Africa or so, were talking about if tea can be brewed with water or not. I told them, “Yes, that is what I often do especially in summer in Japan!.” They were so surprised that tea can be brewed with water, even iced-cubes. No wonder, even some (or many) Japanese don’t know.

Even those who didn’t know about “water-brewed ( known as “mizudashi” ) green tea ” or “ ice-cubed brewed (known as ”koridashi”) green tea”, they start talking about it…..thanks to “bottled tea”.

*You may be interested in this;  about Japanese green tea by ITO EN LTD
http://www.itoen.co.jp/eng/allabout_greentea/index.html

at June 18, 2016
Email ThisBlogThis!Share to TwitterShare to FacebookShare to Pinterest

G7 summit was held in Ise-Shima in Japan last month. At its working lunch, Japanese tea called “Gyokuten” was served. What is “Gyokuten”?? I’ve never heard of it.

According to my reserch, “Gyoku” is for Gyokuro. "Ten” is for “Tencha”, which is the name for tea leaves used for Matcha. Once the leaves called Tencha are ground into fine powder, the powder tea is called Matcha. In other word, ground Tencha is  Matcha. Anyway, "Gyokuten" is a blend green tea from Gyokuro and Tencha.

Instead of Matcha, which is everywhere now,  it may be the time for “unground Matcha” =Tencha now.