♪♪ I have a strawberry  tea, I have a creamy-vanilla Pocky (or Mikado) snacks, ah “strawberry layered cake”!?????  ♬

Bottled "strawberry-flavored tea" by Kirin beverage and "Creamy vanilla-flavored Pocky (Mikado)" by Ezaki Glico appeared on the market on February 21st as a collaborative project. They say if you have this snack with this strawberry tea, you will enjoy the taste of  "strawberry layered cake" in your mouth!

This is not the first time for the two companies to work together. It's the third part of the series since the last two collaborative products were very popular. Does it mean they are good???

Whatever it is....it seems catchy especially among younger Japanese people. 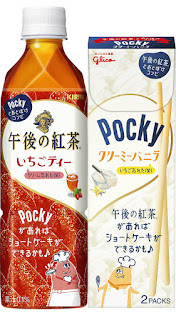 I took part in a chagayu get-together hosted by Ms Takemura from a tea shop “Takemura Gyokusuien” in Kyoto.

Chagayu, literally means tea rice porridge, is unsweetened and savory rice porridge cooked in tea. Rice porridge (called kayu or o-kayu) cooked in seasoned water is very common throughout the country, but chagayu is not. It’s customarily eaten in some areas including Nara, Wakayama and the southern part of Kyoto, not in the Kyoto city.

At the event, three different types of porridge cooked in three different teas including Sencha, Hojicha and very very smoky flavored Bancha were prepared. The nice aroma of teas were coming out while the teas in a bag were being boiled, which made me hungry. 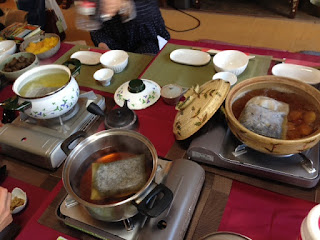 Once tea is ready, put some rice into a pan and boil until ready. Put a lid on and wait for another several minutes. And then, here we are! 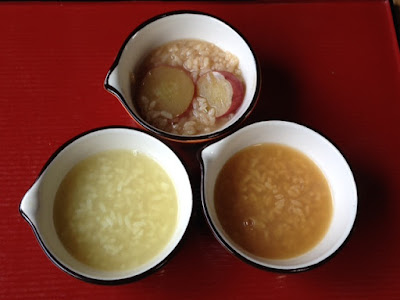 Some other dishes accompanied by the porridge were also tasty. They were all made by Ms Takemura. She is really good cook! 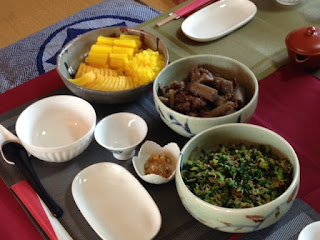 It is said that it's been more than 1200 years since people, mainly the Buddhist monks in Nara, started to eat chagayu. It is a simple dish, but I think chagayu is more than just that especially for people in some areas.

*Web: Takemura-Gyokusuien (in Japanese)   http://www.gyokusuien.com/index.html
They don't serve the porridge at the shop, but they have a great selection of teas.
Posted by tomo
Email ThisBlogThis!Share to TwitterShare to FacebookShare to Pinterest

Spring Starts! -To the “Hachiju-hachiya” -

It was a lovely day today, an ideal for the first day of the spring!

Yes, today is called "risshun" referring to the first day of the spring 2017 according to the traditional Japanese calendar.

And, if you are interested in Japanese tea. just wait another 88 days.The 88th nights from "risshun" is the most important tea day known as “hachiju-hachiya (lit; eighty-eight night)”. In 2017, it falls on May 2. It is believed that drinking green tea made from tea leaves picked on Hachiju-hachiya will bring you good health for the year. So, tea on the day can be called “good luck tea”.

Tea festivals are annually held at tea-producing areas including Kyoto and Shizuoka on the day. Lately, a lot of tea lovers from overseas will join the event. If you happen to be in Japan on that day, why don’t you visit the tea areas! 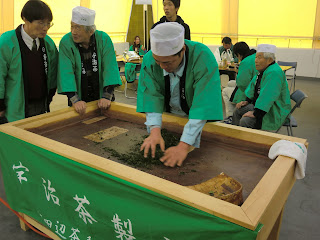