Wakocha (Japanese black tea) is a recent trend in Japan as I posted on Jan 26, 2011.
http://japaneseteastory.blogspot.com/2011/01/wakocha-japanese-black-tea.html
More tea farmers are producing their own wakocha. But, one of the newcomers named “Kaga no Kocha” is slightly different in terms of marketing. Apparently, production is organized by a local tea association, rather than by individual farmers. 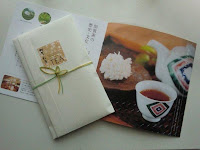 Kaga (in Ishikawa prefecture), known as “Little Kyoto”, is known as a historical area. Roasted stem tea called “bocha” is renowned, but strictly speaking, Kaga is not a major tea producing district. However, this area has tried to create “wakocha culture” not only by cooperating with some tourist spots, but also encouraging the local specialties including porcelain and wagashi (traditional Japanese confection).
The concept of this tea is “omotenashi no wakocha (welcome wakocha)”. Production amount is very limited at this point, but I believe this is a very promising tea. The newcomer harmonized with tradition will warmly welcome more and more people, as time goes on.

*Tea pakckage is tied with mizuhiki (traditional paper strings). This represents tea leaves “isshin niyo” (one bud and two leaves), which are used to produce the finest-quality tea. 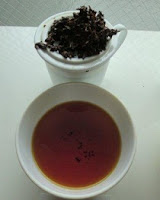 *Kaga no Kocha
Blend of Yabukita and Okuhikari, both of which are usually used for green tea.
Posted by tomo
Email ThisBlogThis!Share to TwitterShare to FacebookShare to Pinterest

Recently, manga, Japanese comic, is widely well-known. Did you happen to know a manga titled "Cha no Namia" (written and illustrated by Kaeru Minamo) featuring on Japanese tea?

The hero, named “Rui” used to be a great tea master at a traditional prestigious tea company in Kyoto. He was expelled from Japanese tea industry caused by a trouble, leaving Japan for a while. But, in ten years, he is back to Japan and starts to get involved in the tea industry again. The story describes his strenuous efforts to promote Japanese tea in his way while struggling with several hardships.
The story includes tea cultivars, tea culture, and  the custom of traditional Japanese industry. Also, the current situation where tea farmers and tea shop keepers are facing also depicts vividly. So, we can learn "tea" while enjoying the book, which is good.
Some volumes can be seen through the Yahoo Japan site.
But only Japanese. Sorry!!
http://comics.yahoo.co.jp/magazine/eden/tixyanon01_0001.html
Posted by tomo
Email ThisBlogThis!Share to TwitterShare to FacebookShare to Pinterest

What would you parch with "HOROKU"?

Have you tried Hojicha (roasted Japanese tea)?
Actually, Hojicha is not always a thing to buy. We can make our own freshly- roasted Hojicha using green tea at home. 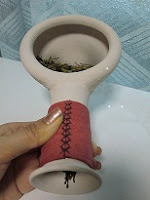 In Japan, Horoku, a traditional earthen parching pan, helps make roasted tea. Nowadays, horoku is not popular as much as it used to be, but it was often used as one of the cooking utensils to parch not only tea but also sesame, salt, rice, beans etc.
In my case, I use it to get rid of extra moisture in the event that tea has some, in addition to making Hojicha.
What interests me the most is to see the last process. Look at the picture. Can you see the hole in the handle? Tea comes through its hole after roasted. It is very effective and clever idea, isn’t it?
I have to admit that I wouldn’t be able to “a roasting expert”, but it is fun to make homemade Hojicha. Why don’t you try at home? A frying pan may replace it. Aroma while roasting tea is fabulous!
Posted by tomo
Email ThisBlogThis!Share to TwitterShare to FacebookShare to Pinterest

There is an expression "nichijo sahanji" in Japanese. This refers to "the everyday occurrence just like having rice and tea every day". As such, the pairing of rice and tea is vital for Japanese lives, that is,  for meals and even for teatime.

For teatime, rice crackers known as senbei, okaki and arare, have long been popular among men and women of all ages. They come in various shapes, sizes, and flavors, usually savory but sometimes sweet. Any kinds of rice crackers receive peoples' favors, and go well with ordinary Japanese tea especially Sencha, Hojicha, Genmaicha and Bancha.
Japanese wouldn't live without this perfect pair anywhere at any time.
Posted by tomo
Email ThisBlogThis!Share to TwitterShare to FacebookShare to Pinterest

Japanese tea has three major components: catechin (astringent ingredients), L-Theanine (umami ingredients) and caffeine (bitter ingredients).
Unlike others, caffeine is often regarded as a “nuisance”. Japanese also care about caffeine, but, if anything, relatively lenient to it in general. Sometimes, it is favorably received when people want to feel refreshed and keep themselves awake.
Why don’t Japanese worry that much about caffeine? There seem to be mainly two reasons.
First, it’s because of “a tolerance to caffeine”. Japanese have high tolerance to caffeine while Europeans and Americans have low tolerance. (Japanese have low for alcohol, though.)
Second, it’s thanks to “L-Theanine”. A report says the component suppresses the action of caffeine to some extent. Therefore, caffeine in tea doesn’t have a great impact on us as much as it is supposed to do.

According to the traditional Japanese calendar, Risshun (regarded as "the first day of spring") falls on the beginning of February.

The 88th day counting from Risshun is a special ‘tea day’ known as Hachiju-hachiya (literally, “eighty-eighth night”). It is believed that drinking green tea made from tea leaves picked on Hachiju-hachiya will bring you good health for the year. Tea festivals are annually held at tea-producing areas including Kyoto and Shizuoka on the day.

Yes, Hachiju-hachiya in 2011 is on May 2. I will not miss drinking tea on that day!
Posted by tomo
Email ThisBlogThis!Share to TwitterShare to FacebookShare to Pinterest

Ready for a World Heritage Site?

Kyoto prefectural gorvernment announced on Jan.27th that it would start surveying and research aiming at the designation of its tea culture as a World Heritage Site. The properties proposed for a World Heritage Site are expected to include tea wholesale district area and tea plantations, centering on Uji where is a historical tea region and known as a heart of Japanese tea culture.
As a first step, Kyoto will try to put its candidate site on the Tentative List made by the Japanese government.
There are some World Heritage Sites related to agriculture such as Saint-Émilion's in France, and Archaeological Landscape of the First Coffee Plantations in the South-East of Cuba.
Can Japanese historical tea region be a World Heritage Site?
﻿ ﻿
﻿﻿﻿﻿﻿﻿﻿﻿﻿We will see!
Posted by tomo
Email ThisBlogThis!Share to TwitterShare to FacebookShare to Pinterest
Newer Posts Older Posts Home
Subscribe to: Posts (Atom)