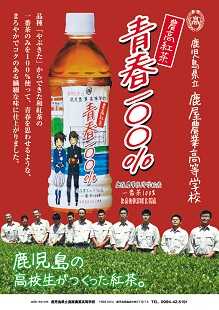 Japanese black tea called Wakocha is a recent trend in Japanese tea industry. But this trend is not limited to its consumption. Producing newcomers seems to attract even promising young tea farmers.

PET bottled Wakocha produced by high school students of Kanoya Agriculture High School (Kagoshima prefecture) is now put on sale within Kagoshima area. The production called “Seishun 100% (lit; 100% Youth)” is made from tea leaves grown by the students, and characterized by faint sweetness and fine body according to a report.
About 2,400 bottles of the wakocha were sent to the stricken areas as relief supplies offered by the students.
Young power will help not only inspire Japanese tea industry, but also cheer up this country.
Posted by tomo
Email ThisBlogThis!Share to TwitterShare to FacebookShare to Pinterest
Newer Post Older Post Home