There is a small shrine called “Sukunahikona Jinja” a at a business district in Osaka. It is dubbed as “Shinno san”, which means “Mr. Shnnong”. He was regarded as the one who first tasted tea.


The place is enshrined both “a God of Japanese medicine ‘Sukunahikona ‘” and “the Father of Chinese medicine and tea ‘Shennong’”. As you know, tea was considered to be one of medicine in the old time. The area is still known as the medicine district because some headquarters or branches of well-known pharmaceutical companies are located. Since tea is not regarded as a medicine anymore, we cannot find any remnants of tea such as tea-related archives or goods.
Every year, “Shinno Festival” is held on Nov 22nd and 23rd at the shrine. Lots of people visit there during the festival to pray for their health, but most of them don’t know the connection with tea. However, for some tea-lovers, this shrine is still “a Mecca of tea". 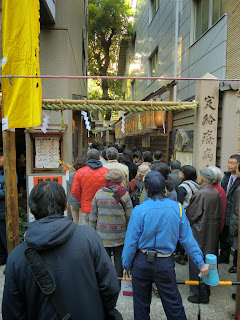 “Shennong is credited with identifying hundreds of medical (and poisonous) herbs by personally testing their properties, which was crucial to the development of Traditional Chinese medicine.  Legend has it that Shennong had a transparent body and thus could see the effects of different plants and herbs on himself. Tea, which acts as an antidote against the poisonous effects of some seventy herbs, is also said to be his discovery. This discovery is in 2737 B.C., according to which Shennong first tasted tea from tea leaves on burning tea twigs, which were carried up from the fire by the hot air, and landed in his cauldron of boiling water. "(extraction from Wikipedia)