This is the black tea (fujikaori cultivar) from Ota Family’s farm in Ureshino city, Saga prefecture. 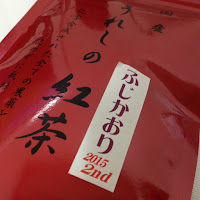 Since Ureshino is one of the biggest producing areas for “tama ryokucha (lit: ball green tea)”, they also process steamed “tama ryokucha”. In addition, they are also known for a special agricultural technique, which is called “Nagata agricultural method”.

To put it very simply, the Nagata method, started by Mr Terukichi NAGATA (1926-2006),  rejects any agricultural chemistry, pesticide and herbicide, and only supplements the nutrients in the soil with minimum amount of water and vegetable-quality compost. This helps bring out the nature and power of tea. (according to my research)

I am not a farmer, but I can easily imagine that it must require immense time and labor to grow tea in such a special way. They grow several cultivars including zairai, sayamakaori, okumusashi, fujikaori and yabukita with this method. Unfortunately, I don't have their green tea in stock now, but luckily their black is on hand. :-) 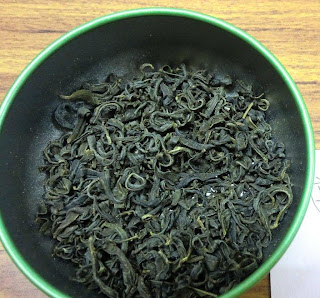 * Tama ryokucha
Like regular Sencha, the leaves are either steamed or pan-fired after they are plucked. Unlike regular Sencha, which is rolled into needle shape at the final stage, there is no rolling process for tamaryokucha. That’s why the leaves are curly like a comma-shaped bead. Steamed tamaryokucha is  also called “mushi guri” or “guri cha”
Posted by tomo
Email ThisBlogThis!Share to TwitterShare to FacebookShare to Pinterest
Newer Post Older Post Home