Tea (known as Kesen-cha), produced at Rikuzen-takata city, Iwate prefecture, is ready to be picked as in other years.
The city is one of the devastated areas caused by the disaster this March. Luckily, most tea firms of the area remain safe, located on the hill. However, most houses were washed away by tsunami, and its scenery is completely different from what it used to be.
Even so, people in Rikuzen-takata city have stour hearts. They didn’t expect they would be able to produce the tea at first. But, they’ve been finding some ways in order to produce the tea even under such a harsh condition since they learned the tea firms are still alive.
Hope is a must for human beings to survive. The tea must be a ray of hope for those living in the area. One of the tea-pickers said this with smiling; “We weeded the tea firm few days ago. Being in the firm gives us energy .”
Unfortunately, there are many who are suffering from disasters throughout the world. There is a little I can do, but I believe this.  “Where there’s a ‘hope’, there’s a way.”

Tea-picking for Kesen-cha will start the beginning of June. The tea will surely be a symbol of their remarkable resilience. 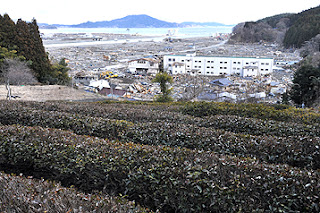