I joined a lunch seminar “ marriage of Washoku and Wakocha coordinated by Takeshi Isobuchi, a prominent tea writer in Japan.at a traditional hotel, Funaya, in Matsuyamam city. Ehime prefecture. “Wa” means Japan”, and “shoku” means food/eating. Kocha is black tea. So it is the marriage of Japanese food and Japanese black. 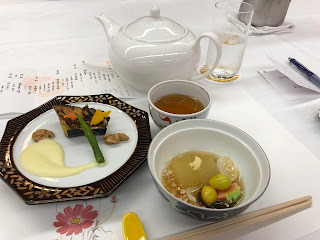 Mr Isobuchi gave us the tip of brewing of tea. When you make black tea, you need the freshly boiled water drawn from the tap.As for water temperature, he added that the 95 ℃ hot water is the best rather than boiling water. If the water is boiled too much, the oxygen in the fresh water will be gone, which won’t extract the beauty of black tea. Surprisingly, preparation for Japanese broth (kombu kelp and from dried bonito) is the same, the chef at the “funaya” said. You shouldn’t let the water boil to boiling point. Otherwise, the unpleasant harshness will come out. I was surprised, actually Mr Isobuchi and the chef were even surprised to know they have something in common. 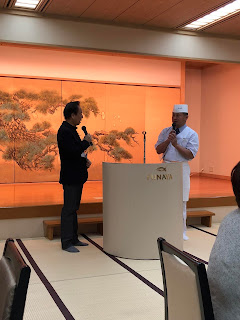 Anyway….many people doubted washoku and wakocha would go together. They thought that  black tea could overwhelm the delicate taste of washoku. But actually, black tea will refresh your palate and gives you more appetite as long as you pay attention to what tea you use, how you brew and how you serve. I mean choosing mild tea, making the tea lighter, and serving it room temperature will make the tea a good company with the food.

You may not be surprised, but for many Japanese, black tea means “tea time”, not “meal”. We always have had green tea instead. But it seems like the attendees enjoyed the marriage of washoku and wakocha. 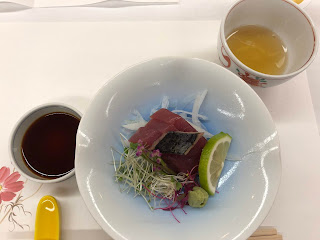 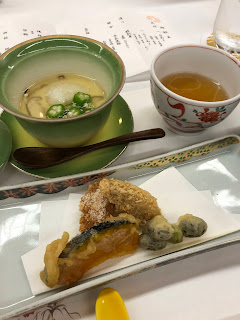